Day 8 - Visitor from Canada and Agility

You know those days which unfold in a way which you could not have contemplated? Today was one of those days.

Following the Kruger expedition, I was ready for my second (and last) week of on-site work at Siyafunda. The schedule for Monday was to have an internal meeting with Smiley and then external meetings in the afternoon. I was surprised to see Themba pick me up but apparently a last minute meeting was called with the Minister of Infrastructure Development for the Province of Guateng. When Themba and I arrived at Palm Ridge, we were asked to meet Smiley at the meeting which was taking place at the Palm Ridge Community Center. That was the first surprise.

I have learned to be agile while I'm here. Although my job requires a great deal of agility and last minute fire fighting, the flexibility required here is of a different sort when you combine it with the fact that I am meeting (on some days 100's of) new people every day, in an environment which is unfamiliar and I do not always speak the same language. It is not unusual here to think you are doing one thing and then end up doing something completely unexpected with no prep time. Agility is one of the key qualities that Smiley possesses and it seems that no matter what happens or how much is going on, he never seems to break a sweat and takes it all in stride.

The purpose of the meeting was for the Minister and her staff to meet with the youth in the community to unveil a new program called Tshepo 500,000. This program is an expansion of the prior program which was aimed at linking up 10,000 youth with sustainable employment opportunities. Given that 10,000 was deemed insufficient, the aim of Tshepo 500,000 is to reach more youth by recruitment means and by ensuring that there are avenues in the communities for youth to obtain the skills they require to obtain employment. Given the linkage between sustainable employment and skill development, organizations like Siyafunda which have been successful at providing skill development services were invited to the meeting.

Upon arrival, the community hall was already filled with at least a hundred people, likely more. I took my seat at the back as an observer until i was approached by a woman who explained that she founded an organization called SICE (Shared Identity Common Esteem). SICE targets (by word of mouth) youth in the community who are subject to hardships such as domestic abuse, substance abuse, poverty etc. and runs classes to build personal skills. The aim is to build the self-esteem of the youth so that they feel more empowered to change their circumstances and improve their lives. Before I knew it, I was taken by the arm to speak to the youth of SICE. They were an impressive group and you could tell that in addition to self respect, they had found a community and support with each other. 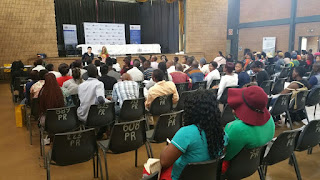 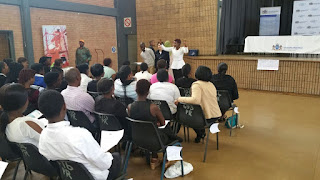 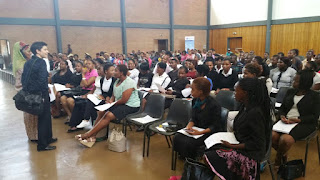 Agility moment #2 came when Smiley came to fetch me to attend the pre-meeting briefing between the Minister and the community leaders. I was feeling a bit trepidatious given I had no clue at that point what the meeting was about, the local protocols to be used with the Minister and the myriad of leaders in attendance and felt that perhaps I was intruding as the "visitor from Canada". But I can be agile too so off we went to the meeting. In the room with the Minister and her staff was about 6 to 8 religious leaders (pastors and traditional religious leaders), the organizer of SICE and several city councillors. The briefing was for the Minister to advise on the objective of the meeting and agenda and to agree on who would speak when. 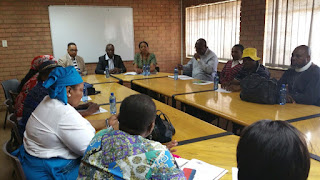 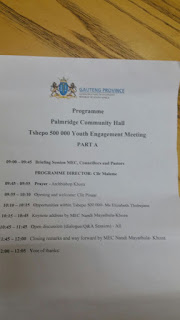 The Minister was very gracious in welcoming the Canadian intruder and the meeting was fascinating. Bearing in mind that there are approximately 9 languages (excluding English and Afrikaan) spoken in South AFrica, people switch back and forth between languages constantly. This sometimes makes things hard to follow in group meetings. Sometimes I don't know based on people's tone and gesticulation whether they are angry or whether they are just passionate. There was an interesting moment in the meeting when the Minister asked why there was no food or tea being served. It seems that the caterer has received in past emails purporting to be from the government which were scam emails. When she received the last minute request to cater the Youth Engagement meeting, she assumed this too was a scam and thus there was no food available. Going back to agility however, Smiley had learned of this fiasco only a few hours earlier and he had arranged to fill the void on short notice by procuring last minute food for all of the people in attendance at the meeting. Siyafunda ended up providing lunch to all of the attendees because they believe that if you want to engage the youth at meetings, you should make sure they have something to eat.

It was time for the meeting to start and the officiator was one of the city councillors who also happens to be a key pastor in the community. It was truly an inspiring meeting and people in the West could learn a few things about livening up meetings. There was singing. There was dancing. There were prayers by each of the religious leaders so that no religion was seen to be considered more important than the others. There were speeches, mostly to motivate the youth by the councillors and pastors. The Minister welcomed the crowd and gave her thanks to the youth and the community leaders and....the visitor from Canada who was there to teach and to learn. At one point, the Minister asked all unemployed youth to stand up and I would say that almost the entire room stood. 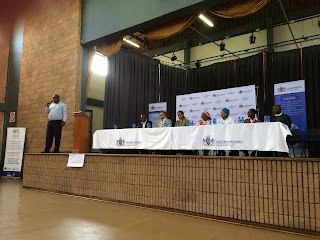 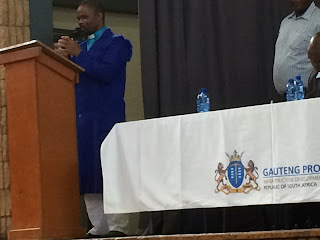 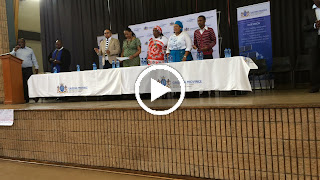 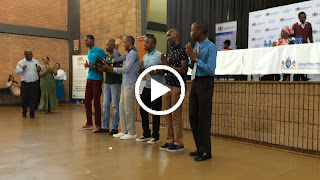 After the QandA, the biggest surprise of all would come when the officiator asked the Visitor from Canada to say a few words at the meeting amongst the rest of the community leaders. Let's say i was largely unprepared for this honour but I do recognize that it was quite an honour and I did my best to give a few words of wisdom about education and making change in the community. Like I said, I did not expect my day to culminate in speaking at the Minister's meeting.

Despite all of the excitement, the day was not over and Smiley and I left to Johannesburg to meet with Adelaide Sheik who manages the Center for Social Entrepreneurship and Social Economy at the University of Johannesburg. Although the student strike is largely over, the universities remain closed since there are still ongoing negotiations over other student related issues which were not yet resolved. We therefore had to move the meeting to a restaurant. We spoke with Adelaide about the project we were working on and she was very helpful in giving her insight based on her expertise in the burgeoning area of social enterprise (more on that later in the week).

We also had a meeting at Intel later in the afternoon so that the Intel product personnel could demo the new online training program for disadvantaged women and girls. The program is multi faceted and teaches skills in computer awareness including social media (and security measures while using online tools), business skills, life skills etc. It is an amazing piece of work and the CKC managers and staff joined us at Intel so they could begin planning the implementation of the new course at the centers. 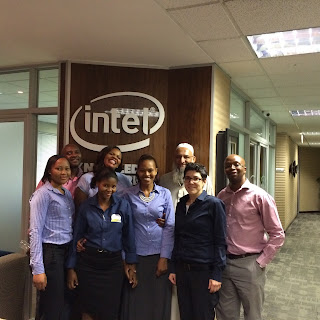 Given this was the last day i would spend with Babalwa and Moses who were travelling back to KZN the next day, Babalwa, Moses, Sarah, Mpho, Machalette and I went to dinner. Babalwa, who I have grown close with, wanted me to see where she grew up so we travelled to Thembisa (the second largest township in South Africa following Soweto) for dinner. Unfortunately, rush hour in Johannesburg is not a pretty sight and it was raining so it took us one and a half hours to get there. I didn't mind as this would be my first time out after dark! 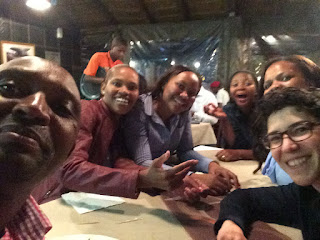