It is hard to believe that my time in South Africa is nearly over. I feel very lucky right now. Smiley has facilitated an experience for me which allows me to obtain a robust picture of the Siyafunda mission, drivers, operations and relationships. And yet, there are more people I would like to meet and more communities which I would like to visit and speak with. While the schedule has been jam-packed, I would love the opportunity to continue for another 2 weeks.

Today Smiley and I travelled to Pretoria, the administrative center for the federal government. We met with Brian, Mohamed and Duma of the Ministry responsible for economic development. Duma Nkosi is the prior mayor of Ekurleheni who is now a senior member of the Economic Development Department. I was slightly trepidatious about participating in a meeting with the government given that I am unfamiliar with the appropriate protocol to be employed particularly given the importance of this Ministry to Siyafunda. My hesitancy was quickly dispelled in the meeting as the department participants clearly share the goals of Siyafunda in addressing the issues of unemployment and education and were very direct and transparent in the meeting. I could see quickly how the EDD is truly a valued partner. It was also interesting to hear about the priorities of the EDD and the plans to address the issues. They are hoping that Siyafunda can help them realize these goals and we left with three potential areas of collaboration with the Ministry. 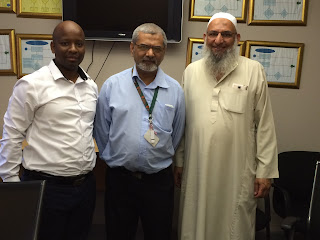 Before we left Pretoria, Smiley took me to see the Union Buildings which are at the highest point in Pretoria and is the official seat of the South African government. There is a beautiful view of Pretoria from the site. There is also the most amazing sculpture of Nelson Mandela. It was a treat to be able to see it. 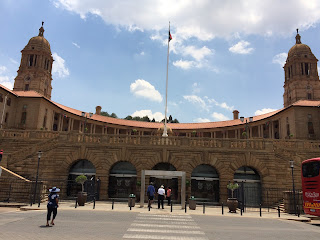 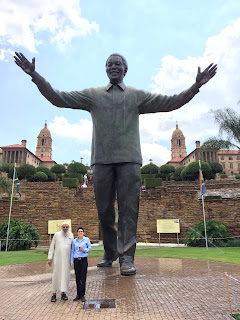 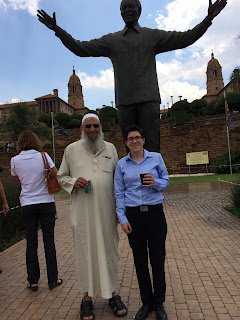 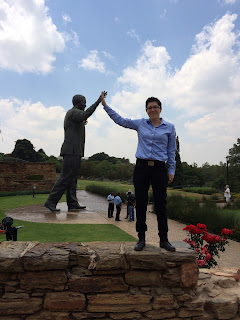 On the way back to Palm Ridge, we stopped in Alexandra (Alex) which is one of the poorest townships in South Africa and one in which many people still live in temporary housing. It was the site of an uprising in the 80's which was prompted by an attack on a funeral by security forces. 40 people were killed. We went to the Alexandra CKC to meet up with Thabani, Ruala and Ferruh from Intel. Ferruh is in Corporate Affairs at Intel based in Istanbul and wanted to visit a center in-person to speak to community members training on the Intel skills programs. The first woman he spoke to told him that she took the training and has already found herself a job as an assistant. Another clear indication that Siyafunda, the CKC's and the corporate partners are making a material difference in people's lives. Let's see if you can tell which young woman got a job. 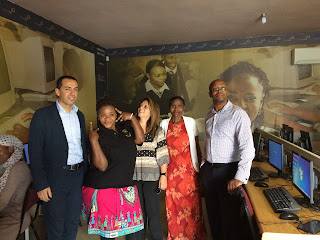 Later in the day, Smiley had arranged for a meeting with Mark Lamberti who is very well known in South Africa and who graciously invited us to his home. Mark is currently the CEO of Imperial Holdings and was a founding partner of MassMart which was eventually acquired by Walmart. He has been the recipient of many awards in South Africa for excellence in business leadership and entrepreneurship. Mr. Lamberti is a legacy supporter of Siyafunda and established the relationship between MassMart and Siyafunda which continues today.

My impression is that he is a no-nonsense person. And while I certainly respect him for his accomplishments and his very impressive business skills, that is not what impressed me most. Mark is dedicated to South Africa, its people and to improving this country and addressing its challenges. I find out later that he was a supporter of the ANC prior to the end of apartheid and for clarity he is a man of European descent. He spoke about the initiatives his current company are engaged in to help the community including establishing libraries in schools (including employing librarians to work there) and setting up medical clinics in communities.

He also gave me a different perspective as a South African who (in his words) chooses to stay in face of the challenges. He gave a word to a phenomenon I had been observing in the last week: Ubuntu. Ubuntu is essentially the concept that a person is a person through other people. In other words, the phenomenon I have been observing of the great kindness and generosity displayed by South Africans towards their communities and other people is based on the fact that people define themselves by how they are with other people. It's a beautiful philosophy and one that is pervasive here.

Today, protests continued at Wits University. Although most students are interested in resuming classes and exams, there are some students who feel that the protests should continue until all issues are resolved. One of the main issues which remains a matter of contention is the university's outsourcing of certain services. Unfortunately, these protests also had an element of violence.