It is difficult to adequately capture yesterday with words or even photos. For one, I went on an 8 1/2 hour road trip which felt like it was two days of life experience packed into one. And, I was overwhelmed by the magnitude of hardship faced by the local communities but more so by the magnitude of people's goodwill and selfless generosity.

On the way to the Palm Ridge CKC today, I realized that the number of people I had seen waiting on the side of the road each morning were not waiting for the most commonly used mode of transportation, the mini-bus taxis. They were unemployed folks (many foreign immigrants) who sit on the side of the road in the hot sun waiting to see if someone that day has a need for temporary (and probably under minimum wage) labourers. While the policies of apartheid including those which forced segregated transportation, cemeteries, schools and residential areas (to the point of forced re-settlements of non-white communities to accomplish residential segregation) are in the past, it is apparently a long road (not yet travelled) to unwind the effects of these policies.

I set off on a road trip with my travel companions Babalwa, Moses, Bestos and Themba at 930 am from Palm Ridge so I could see more of the CKC's and CKC partners.

First stop: the Thokoza CKC managed by Puleng. We drove in on the infamous Kumalho Street which was a key battleground during the severe political violence which occurred in the early 90's and which lead to the deaths of many people in the township. While the political violence has ended, the township is still rife with people living in "temporary houses". Small businesses like hairdressers and food providers are operating from some of the temporary structures.


The Thokoza CKC shares its building with the Fab Lab (Fabrication Lab) which is operated by the municipality. 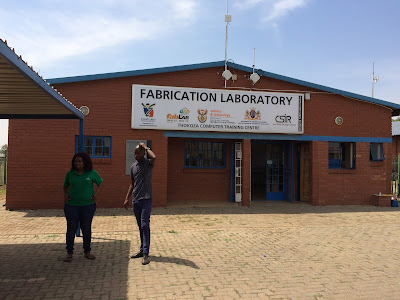 The CKC offers administrative services (printing, faxing, scanning) and also the ICT and skills training courses. The Fab Lab offers the ability to use computer programs to generate images for 3D printing or wood products. Since I had never seen a 3D printer in action or a ShopBot ever, I was fascinated by the technology. 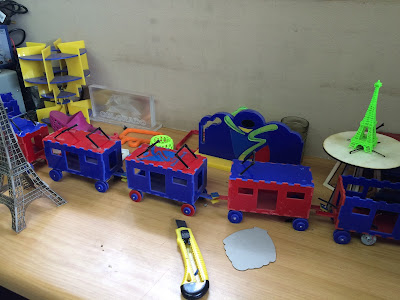 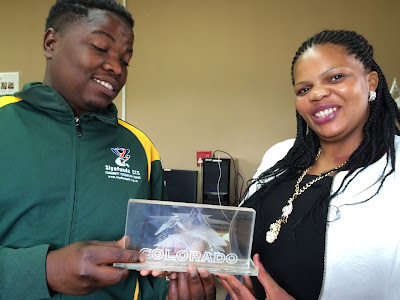 Results of 3D printing and etching. Shout out to my Englewood colleagues: modelling provided by Bestos and Babalwa 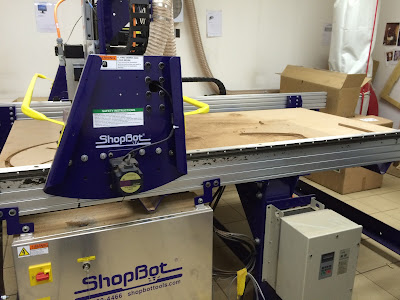 
It did seem odd to me though that although there is a lack of basis computer use skills, there are machines available for 3D printing. Unfortunately, the municipality has decided to offer the same services offered by the CKC and has asked Puleng to close up shop by the end of the year. She has not yet found a replacement location for the Thokoza CKC. 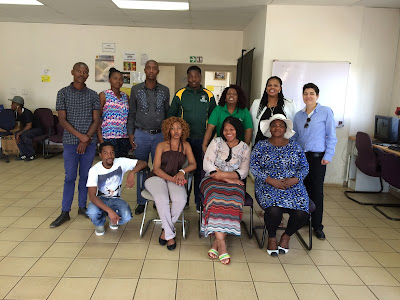 Photo with Poleng (green shirt), the staff and some of the CKC students who we dragged from their computers for a photo op

Second stop: We next accompanied Bestos to the Alok Tele-Center (which is partnered with Siyafunda) so he could address some IT hardware issues they were having. Alok itself is a Thokoza community organization which offers IT skill training courses but also is a forum for community awareness events addressing all types of issues including HIV/AIDS prevention, domestic abuse, and substance abuse. 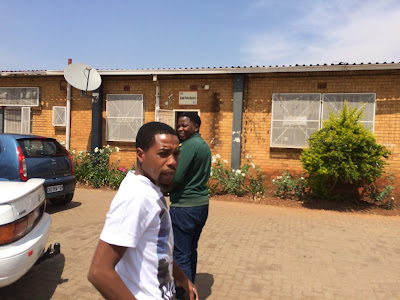 Third stop: Before we left Thokoza, Themba had to attend at the Tshepong Stimulation Center for Intellectually Disabled Children. Tshepong has asked Siyafunda to help roll out certain basic IT and administrative skills to developmentally challenged adults at a location outside of Thokoza so that they can learn to answer phones and make appointments. This is an interesting project for Siyafunda and the CKC's as it will be a first time foray into this space. On an important side note, in addition to programs relating to education the unemployed and poor disadvantaged women and girls, Siyafunda is already involved or piloting programs for disseminating IT training to those with hearing or sight impairments and to those incarcerated in prison.

Before we arrived at Tshepong someone jokingly asked me if I cry easily. By the time we left, I understood why the question was asked. Tshepong in Thokoza takes care of children with varying degrees of cerebral palsy. There are approximately 50 children being looked after each day at the center of which only about 6 reside there. The rest get picked up and dropped off daily in the one van that Tshepong has. For the 50 children, there are very few staff who work for a salary that does amount to enough to subsist on. There is a two to five ratio for the children with the most severe conditions who cannot even move by themselves. We spend along time at the Center mostly because none of us wanted to leave that quickly. We were introduced to all of the staff and social workers and spent time in each room with the very adorable kids. The little 4 year old who couldn't walk 6 months ago but who proudly showed off her ability to walk with assistance. The little boy who had started to progress to walking at the Center before his parents decided that traditional medicine would be of more use to him. He is now back at the Center but has significantly regressed so that the rehabilitation must start again from the beginning. The kids who can't move at all or can only slightly move their limbs. But most of them were so happy to see us or, with the shyer ones, interested that we were there. Most wanted physical contact and I haven't had that many hugs since...ever. In fact, in photos you can see the before and after state of my hair attributable to the little boy who literally jumped into my arms and thought it was tremendous fun to do a re-style. 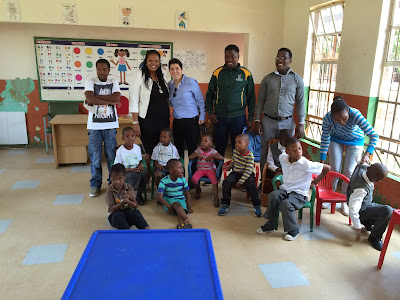 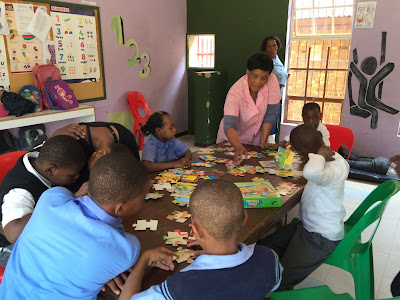 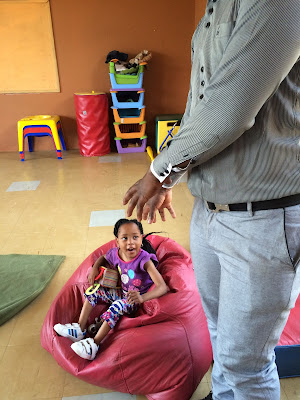 An American woman donated sufficient funds to the Center so that they could renovate a part of the building for residential purposes. The majority of the new cribs stand ready but un-used because there simply are not enough staff to look after that many children 24/7. 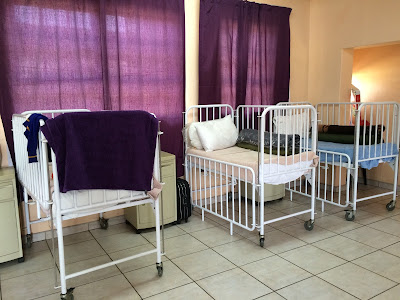 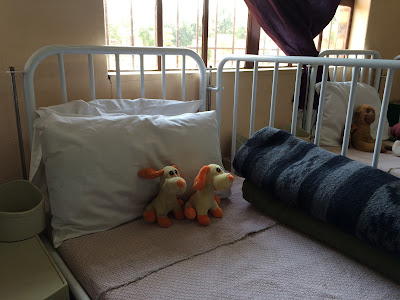 It wasn't just the kids and the challenges they face that was the most heart wrenching part of the visit. It was also that these individuals opt to lovingly take care of these kids out of nothing more than their kindness and passion for doing good and making a difference. Again, they get paid almost nothing and the manager has to apply each year to private corporate funders to generate enough money to even pay them a bonus. Some years he can and some years he can't. By the time we left, a few of us teary-eyed, had thoughts about leaving our jobs to join the staff at Tshepong.

This is roughly the time when my phone ran out of juice.

Fourth stop: Next stop was the township of Katlehong to another partner of Siyafunda which operates a web access site and a job posting access site as part of a program called Lulaway. Those interested in jobs can work on their resumes and get help uploading their resumes to a central job search engine. What was most interesting about the site was that in addition to the multiple NGO organizations housed there, there is also the church housed by a tent which has been unofficially occupying the space for years.

Fifth stop: After we left Katlehong, we drove to Ratanda in Heidelberg which is a rural community. There was a vast difference in feel between the townships closer to the city and Ratanda and there are few transportation channels to get there. The road as we neared Ratanda was primarily filled with two kinds of residences: government housing but even more temporary housing. 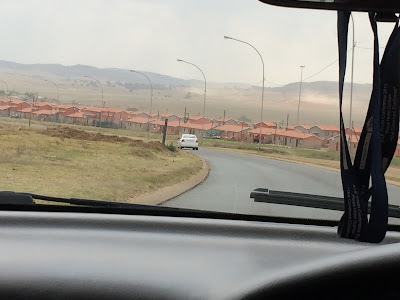 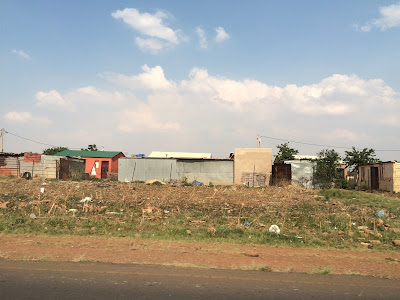 Local community residents have waited for many many years to be granted permanent housing and there are theories as to who is able to get the privileged access to the permanent housing. The staff at Rotonda, like Sara Emily who started out as a student of the CKC and now works there (as is the story with several of the staff), were so friendly and gracious and have grown so quickly that they have expanded to a separate building. Only a few years ago, the entire CKC, the municipal properties around it and the area of Ratanda at large was literally set on fire during violent protests. Sadly, the CKC was destroyed. Moses, the CKC manager, and the other staff rebuilt the CKC themselves as it would have taken too long to wait for insurance proceeds and other bureaucratic process to kick in. When I asked him what he did in the time that the CKC was destroyed, he told me he was strategizing as to how to rebuild it because it wasn't right to have taken people's money for IT learning courses and not be providing them a service.

The day had not yet ended.

Sixth stop: the community "Drop In" which Moses works with in his "spare" time. The Drop in is a local center where orphans and vulnerable children come each day to be fed two square meals, have their clothes laundered and to get help with their homework. The point is to keep these kids off the streets and away from the rampant drug and crime problem and make sure they are looked after since they don't have families who are able to. The center was kind enough to give us a tour. There were at least 100 kids in the center all patiently waiting for their meals which get served to them by a staff of all volunteers. Once again, the passion of certain people to dedicate their time and lives to looking after vulnerable kids has amazed me. The size of the crock pot and oven in the kitchen also amazed me.

Seventh stop: Before we leave Ratanda, Moses asks if we can stop at SANCA headquarters. SANCA is the South African National Council on Alcoholism and Drug Dependence where he used to work because he wanted me to meet his prior boss. Suzette spent some time with us explaining the tall order they address on a daily basis across the country. In addition to prevention education, they operate outpatient clinics for people with severe drug abuse problems. Drug use is a rampant problem in the townships and there are insufficient in patient programs to help those who are trying to get off of the most serious drugs. It is no surprise that the crime rate is so high.

End of the Day: Many hours after we started our trip, we drove back to my guesthouse mentally exhausted and overwhelmed by the day's events. It was a tremendous day on so many levels and Moses, Bestos, Themba and Babalwa shared with me so many insights about the country and their personal lives. They are all very unique people who themselves do so much to contribute to problem solving and helping in their communities and i can see the impacts each of them have made as I spend more time at the Centers and with them. We had such a good time that Bestos and Themba are re-arranging their schedules on Friday so that they can join Moses, Babalwa and I on our trip to Soweto.