Smiley and I were meant to go to Wits University to meet with Dr. Susan Steinman and Chimene Chetty who are each affiliated with Wits Business School. Wits University remains closed today given ongoing negotiations and so we travel to Chimene's house for our meeting. Both Chimene and Susan are also affiliated with Ashoka and Dr. Steinman is the individual that recommended Smiley to Ashoka as a fellow. It was clear that they both are well versed in the areas of social entrepreneurship and are social activists. They were excited to hear about Smiley's plans to "franchise" Siyafunda and offered valuable insight and their assistance in the issuance of my report. 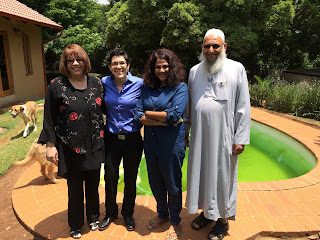 It was also apparent that each of them are pioneers in bringing to fruition the idea that organizations whose primary mission is to contribute to the community and advance social causes should also have meaningful ways to generate profits so that such organizations can sustain themselves in the long term as opposed to solely relying on donations and third party funding. This is an idea which I first became familiar with at the Leadership Conference in Bucharest and it is certainly the best way to allow organizations to help more people and not fall over after a few years if charitable donations and funding dries up. This idea of "social entrepreneurship" is one which is unfamiliar to many people and is perhaps not completely understood. Some people mistakenly think that social purpose organizations should be charitable altogether while not considering that sustainability is crucial to the people who run and operate such organizations and also to the community so that it may receive ongoing services for the long term.

Chimene Chetty introduced me to a new phrase which I will be sure to adopt going forward: conscious capitalist. I think this term sums up the stance of many people who support societal improvement but realize that making money to advance causes AND to make a living for themselves are not mutually exclusive.

I also had the pleasure of meeting Chimene's three rescue dogs and I couldn't resist the temptation to get some dog time with them. She told me that the two dogs which look like hounds are actually a cross between a Yorkie and a Rhodesian Ridgeback. I'm not sure if she was pulling my leg. 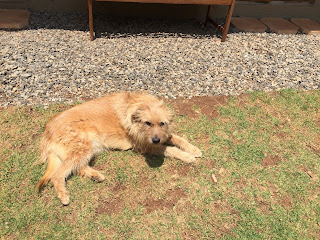 It was also reinforced for me how much of a network Smiley has built for the purpose of enhancing what Siyafunda can do to help communities. In addition to corporates, government, other organizations, and the community, Smiley has also engaged with local thoughts leaders and academics to generate momentum for change making. It is a valuable lesson to learn as to what can be done when all stakeholders are engaged and together work for a common goal.

Smiley and I also had lunch with Limbani Phiri of the Ashoka Foundation office in Johannesburg. Limbani gave me a rundown of all of the amazing programs Ashoka runs in addition to the EIR program which I am currently participating in. One of the key programs is the Changemaker School Network which includes schools in any environment which teach children about the concept of changemaking, which are innovative and which demonstrate the ability to influence others to follow their lead. For example, one school which Limbani spoke about was one which does not have many funds to operate in their rural community. The children of the school have come together and on the weekends give lessons to the community so that they can generate funds to run their own school. 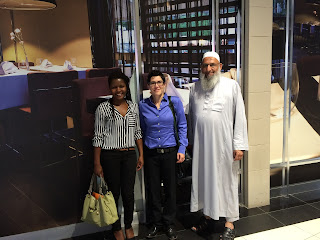 Limbani also explained the process which Smiley went through to be accepted as an Ashoka fellow. It became clear to me as to how Ashoka has garnered the reputation it has and how it has succeeded in progressing its impressive goals. The criteria to be met is exacting and to be a fellow one literally has had to have made a demonstrated impact in the area of changemaking, innovation and influence. Having gotten to know Smiley over the last week and a half, it is not a surprise to me that he was accepted as a fellow. (Smiley will not like my comments here as he is also one of the most modest individuals I have met).